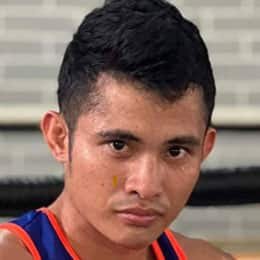 8 years and 5 months into his professional boxing career, Melvin Jerusalem has fought 22 times with 20 wins and 2 losses. As of February 2023, Jerusalem's boxing record stands at 20-2 (12 KO wins).

Melvin Jerusalem (Gringo) is a Filipino professional boxer. He was born in Manolo Fortich, Bukidnon, Philippines on February 22, 1994. Jerusalem made his professional boxing debut at the age of 20 on July 13, 2014. He is a strawweight world champion. Jerusalem is 28 years old, he will turn 29 in 21 days.

Melvin Jerusalem made his debut against Michael Camelion at the age of 20 on July 13, 2014, defeating Camelion via 4 round unanimous decision. He went on to win 10 more consecutive fights after the debut, which included 7 wins via stoppage.

Jerusalem had his first world title fight at the age of 22 on January 25, 2017 after 11 professional fights, against Wanheng Menayothin for the WBC title. He lost to Menayothin via 12 round unanimous decision.

Jerusalem has won one world title at strawweight. For all the details about Jerusalem's world title wins and defenses refer to "Melvin Jerusalem World Titles".

Melvin Jerusalem has had a total of two losses in his professional boxing career so far — one of them in a title bout and one in a non-title bout. He suffered his first loss against Wanheng Menayothin via 12 round unanimous decision on January 25, 2017, which ended his 11-fight win streak. He has never been stopped, both his losses came via decision. For more details about these defeats, refer to "All of Melvin Jerusalem's losses".

His most recent fight was on January 6, 2023 against Japanese boxer Masataka Taniguchi for Taniguchi's strawweight title. Jerusalem won the fight via 2nd round TKO and won the WBO title. It's been 26 days since this fight.

Jerusalem's professional boxing record is currently at 20-2, which includes 12 knockout wins, and 1 title win. He is on a nine-fight winning streak.

Although Melvin Jerusalem had a total of 22 fights till today, this fight against Masataka Taniguchi is the sole highlight of his career so far.