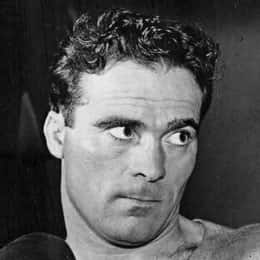 Marcel Cerdan (Le bombardier marocain) was a French professional boxer. He was born in France on July 22, 1916. Cerdan made his professional boxing debut at the age of 18 on November 10, 1934. He was a middleweight world champion. He died on October 28, 1949 at the age of 33 years. Cerdan is a Hall of Famer.

Cerdan made his debut against Marcel Bucchianeri at the age of 18 on November 10, 1934, defeating Bucchianeri via 6 round PTS. He went on to win 43 more consecutive fights after the debut, which included 17 wins via stoppage.

Cerdan had his first world title fight at the age of 32 on September 21, 1948 after 110 professional fights, against Tony Zale for the middleweight NBA and The Ring titles. He defeated Zale via 11th round RTD to become the middleweight champion of the world.

Cerdan won one world title at middleweight. For all the details about Cerdan's world title wins and defenses refer to "Marcel Cerdan World Titles".

Marcel Cerdan had a total of four losses in his professional boxing career — one of them in a title bout and three in non-title bouts. He suffered his first loss against Harry Craster via 5 round DQ on January 9, 1939, which ended his 44-fight win streak. He was stopped once and lost three times via decision. For more details about these defeats, refer to "All of Marcel Cerdan's losses".

His last professional fight was a middleweight title defense bout against American boxer Jake LaMotta at 32 years of age, on June 16, 1949. Cerdan lost the fight via 9th round RTD — and lost his NBA and The Ring titles.

He was inducted into the International Boxing Hall of Fame (IBHOF) in 1991.

Although Marcel Cerdan had a total of 114 fights, this fight against Tony Zale is the sole highlight of his career.