Gervonta Davis' next fight will be against Ryan Garcia on 15 April, 2023 at Las Vegas, Nevada, U.S. It will be a 136 pound catchweight fight. At the moment it is not known if Davis' WBA (Regular) lightweight title will be on the line or not.

In this fight, Gervonta "Tank" Davis (28-0, 26 KOs) is coming off a knockout win against Héctor García on January 7th. Davis initially had trouble figuring out and timing García, who came in with a well-prepared game plan and executed it very well. As the rounds progressed Tank made adjustments to be able to successfully create opportunities for attack and counter. In the 8th round, he landed a hard left from the southpaw stance which shook García, who almost went down. García managed to stand fighting till the end of the round but could not come out for the 9th.

Incidentally, Davis' next opponent also happens to be a Garcia. So the "Davis vs Garcia" saga continues in his next fight. 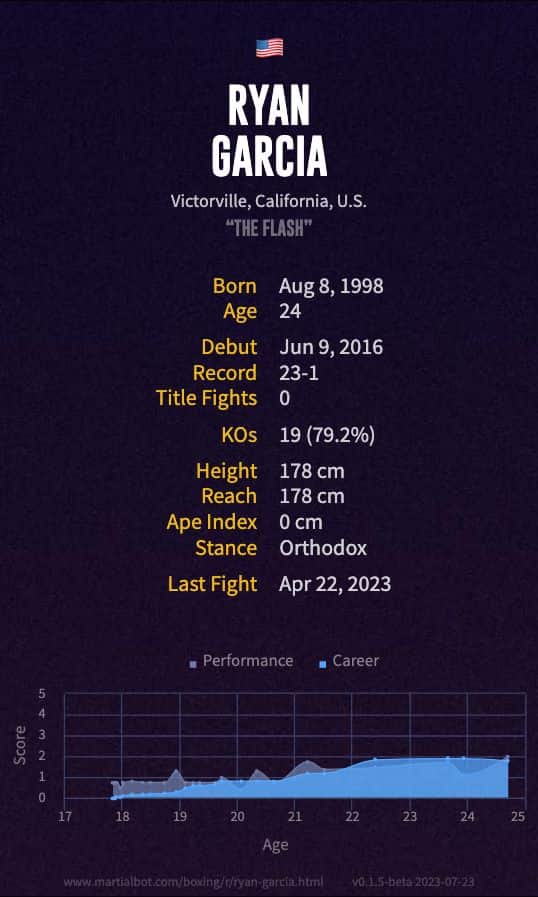 Ryan "The Flash" Garcia (23-0, 19 KOs) is also coming off a knockout win. Garcia fought Javier Fortuna on 16 July, 2022 at the Crypto.com Arena, Los Angeles, California, U.S. He dominated Fortuna throughout the fight, knocking him down multiple times, and finally stopping the southpaw Fortuna with a 1-2-3 combo in the 6th.

One area where Gervonta Davis has a definite edge over Gracia is power. Davis's power is truly exceptional. A well-placed power punch can potentially stop Gracia or pave the course for an inevitable stoppage.

Overall, it is a very intriguing matchup. It feels like either could win, but our AI favors Tank at 65-35. Let's see how it plays out.

We don't know who will win this fight, but one thing is for sure, whoever wins will get a tremendous career and popularity boost — and someone's zero will be gone. If the win comes via way of knockout, we will have a new boxing superstar in the making. This fight is probably going to be one of the biggest selling fights of 2023. Fireworks guaranteed, April 15th can't come soon enough.