Devin Haney's next fight will be against Vasiliy Lomachenko on 20 May 2023, tentatively at the Madison Square Garden, New York City. He will be defending his undisputed lightweight title, with five belts on the line — WBA, WBC, IBF, WBO, and The Ring. 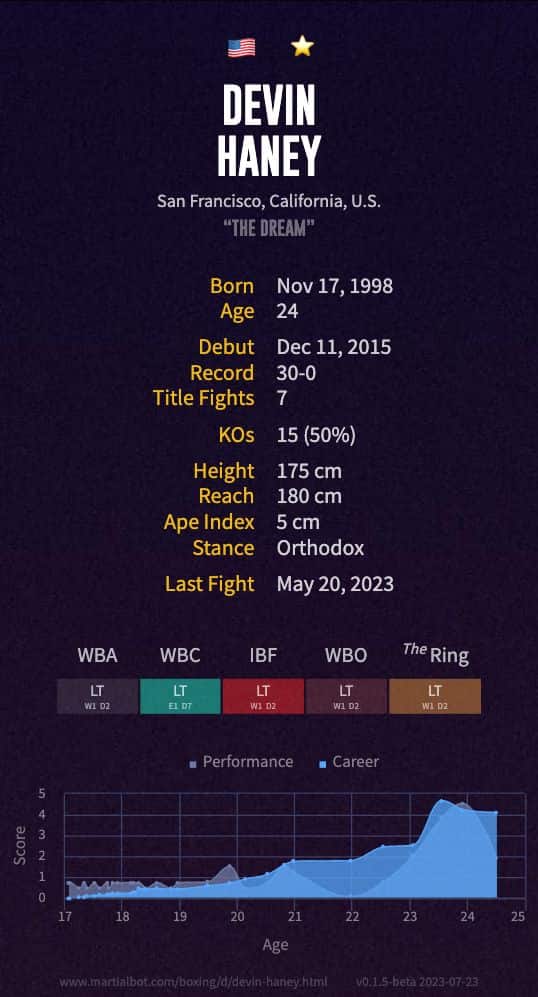 Devin Haney is coming off a successful title defense against George Kambosos Jr., whom he had defeated in October last year to become the undisputed lightweight world champion. Haney unified his WBC title with Kambosos Jr.'s WBA (Super), IBF, and WBO titles. In their latest fight, Haney defeated Kambosos Jr. again via 12 round unanimous decision.

Interestingly, Haney's WBA, WBO, and The Ring titles once belonged to his next opponent — Vasiliy Lomachenko. Loma lost these titles to Teofimo Lopez, who then lost them to Kambosos Jr., and who then lost them to Haney. This fight is a great opportunity for Loma to win back what was once his, in addition to becoming an undisputed world champion.

Coming into this fight, Haney is on a four-fight win streak, all of them in world title fights, and all of them via unanimous decision.

After the loss to Teofimo Lopez, Lomachenko fought Masayoshi Nakatani in a non-title fight. Loma knocked out Nakatani in the 9th round. Nakatani had fought Teofimo Lopez before the Loma fight, and lost to Lopez via 12 round unanimous decision. If this is an indication of anything, it is that Lomachenko is capable of fighting better than Teofimo against some opponents, and that Loma is not as washed up as some may think.

Loma then fought Richard Commey and Jamaine Ortiz, and convincingly beat both via unanimous decision. He is on a three-fight win streak coming into this fight.

Haney is 24 years old, and is just getting into his physical prime. Loma is 35 years old, which some may say, is "old" by boxing standards. Old in this case is not about weakness or loss of technique or form, it is almost always about wear and tear on the body and injuries, which hamper fighters from performing the way they used to when they were younger.

There have been special cases like Bernard Hopkins and George Foreman, who put on some exceptional performances way past their supposed prime years. Let's see if Loma too do the same.

Haney is taller than Loma by 5 cm, and has a 14 cm reach advantage. However, Loma has faced taller opponents and one of his opponents had the same reach as Haney — Naktani, who he had little trouble figuring out and making adjustments against, and ultimately winning via TKO.

So height and reach alone may not be enough for Haney to gain a significant advantage against Vasiliy Lomachenko. However, Haney is significantly bigger than Loma, which could certainly be a factor.

This is a orthodox (Haney) vs southpaw (Loma) fight. Lomachenko is one of the most popular active southpaw boxers currently, and he is no stranger to fighting orthodox fighters. Haney has had one major southpaw opponent — Joseph Diaz — whom he defeated via unanimous decision.

Haney's jab is his best weapon. Even if he lacks devastating power, he is quick and accurate; combined with his good fight IQ, he has been able to repeatedly win convincingly in the eyes of the judges. Although Haney had a respectable number of knockouts early in his career, he hasn't stopped anyone in four years and is on a six-fight decision-win streak.

He must make use of his long and accurate jabs and fight from the outside. Any attempt at "putting on a show" or trading with Loma could get him in trouble like the time when he decided to trade with Jorge Linares and almost got knocked out. Boxing judges aren't always known for their best scoring, and going the distance with a Top Rank-favorite, Loma, could be risky for Haney. Especially if Loma puts on a good performance.

Loma will need to keep this fight in the close range, else it is going to be hard for him to land anything significant.

Apart from his injury, Loma was probably concerned about Teofimo Lopez' power and counter abilities, which made his performance against Lopez rather lacklustre. Knowing that Haney isn't as dangerous as some of his former opponents, Loma may press forward to draw out Haney and look for counters and openings and make it a close-quarters combat, where he is likely to find good success.

Our AI favors Devin Haney to win via a huge margin of 66-34. Looking at both the fighters' recent performances and their stats, it may seem like a mostly-accurate guess by the AI but Loma is a very dangerous wild card in this fight. We will get a clearer picture of where he stands today only after this fight, till then everything is just speculation.